skip to main | skip to sidebar

I love the Rebirth Brass Band, and I love the Maple Leaf

I just returned from New Orleans, where I saw the Rebirth Brass Band in the Maple Leaf Bar once again. After all these years, they still play there every week, and if I would live there, I'd probably be there to see their show in this place every week too. It's quite an experience, which can never be fully captured by a video.
Eingestellt von Michael um 11:32 Kommentare:

i was recently told dat my blog entries is too borin - so, fa a change, i'd dig to share somethin wicked wiv yous. as some of yous may know, i ave a link to da ali g translata on my webpage, askin people to translate their emails before dey send them to me if dey dig my respect. so now, fa da first time, a colleague wiv a sense of uma translated a standard invitation to review a papa fa a magazine. in da house's an excerpt:

--
(..)
i believe dat da subject matta is within your general area of expertise and int erests and i would dig yous to serve as a reviewa fa da papa. a copy of da papa is attached at da batty of dis note.

if available, i would appreciate it if yous could review da papa and borrow me your assessment as soon as possible.
(..)
if yous cannot make dis date or is not available to do dis review, please let me know as soon as possible. if y ou is unable to do dis review, suggestions fa alternate reviewers would be mostest welcomed.
(..)
***i would appreciate it if yous ack da receipt of dis note.***

After the nice gig that we played as session opener in Treibhaus earlier this year (see this old posting for pictures and even a short video), Nina Braith invited me to join her for two more gigs, together with a keyboard player from Vienna and, once again, Matthias on bass. Thanks Nina!

How things are connected

Sometimes it's strange how things are connected in this world... here are two examples.

1) Just before going to Beijing, in this posting, I wrote about the Steve Gadd drum lick (broken doubles between hi-hat and snare) from Rickie Lee Jones' "Chuck E's in Love". You can hear it here.

Now I'm back from China. In Hongkong (a part of a private trip after working in Beijing), we went to see a jam session in a bar. People there told me that the drummer is really good ... and then, during a solo, he played exactly this lick :-) - things are connected in this world, and drummers love Steve Gadd everywhere.

2) Another strange coincidence: I'm a big fan of the new orleans keyboard player / singer Jon Cleary, and was hoping to finally see his band when I get to New Orleans again later this year (late Nov / early Dec). Turns out that he plays in Treibhaus with John Scofield (and George Porter Jr. from the Meters on bass! wow!) on 1 December... so I'll miss him because I'll be in New Orleans!
Eingestellt von Michael um 13:44 Keine Kommentare: 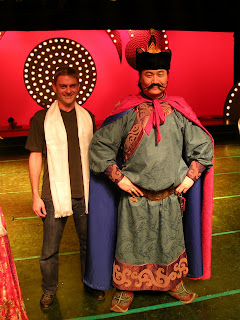 Yes we're having some fun here... (in addition to all the hard work, of course!)
Eingestellt von Michael um 18:25 Kommentare: 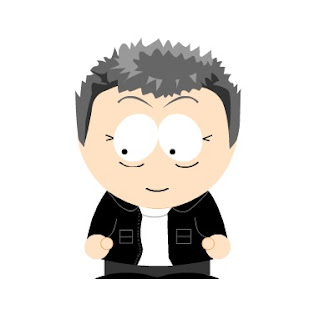 Inspired by the simpsonized picture of myself in my blog, Hansi and Sebastian (notice that his consultation hour is by appointment only! be sure to request an appointment now!) decided to manually Southpark-ize me. I guess I owe it to them to present the results here... I hate to say it, but I have to admit that they're not entirely unrealistic :) 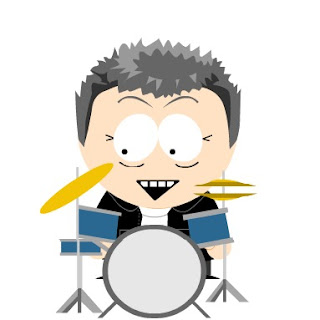 As my second trip to China is getting closer, just like the first time, I start noticing references to China everywhere. On TV yesterday, Bart Simpson got infected with the Chinese Panda virus. While I searched for bars in Beijing, I was coincidentally listening to "Woody and Dutch on the Slow Train to Peking" from Rickie Lee Jones' "Pirates" album (one of the most beautiful albums ever!). Is this just a coincidence, or is China really omnipresent in our lives here in Europe, and I only notice that before going there?

Since this is supposed to be a blog about drumming, let me say that Steve Gadd's drumming on Woody and Dutch is just great (this shows why I once liked brushes :-) ), and anyway nobody else could have played a better drum track for "We Belong Together" from the same album than (check out what happens after 2:20). And, speaking of Steve Gadd and Rickie Lee Jones, there can be no better example of his broken doubles between the hi-hat and snare than in the song "Chuck E's in Love" from the album named "Rickie Lee Jones". Ah, I just remembered, that one is available on Keith Cronin's great "Drum Licks from Hell" page, right here. This page is great, just like his "Drum Grooves of Doom" page. To get back to Rickie Lee Jones - I've been a big fan of hers for a very long time, but I had no idea that Tom Waits was once her lover until I visited her Wikipedia page the other day. Why didn't they record a duet album? Shame...

Hm, now that was more about drumming and music than about China, despite the title. Well that's just the spirit of this blog - "mostly drums".
Eingestellt von Michael um 17:34 Keine Kommentare:

Check out this picture of Petra :-) quite realistic, except for the lipstick. 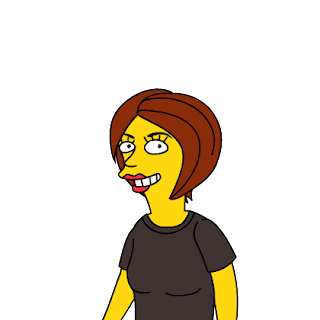 On 30 August, starting at 18:00, I'll play with the Westplace Jazz Sextet. Location: unterer Stadtplatz, Kufstein (open air - will be cancelled in case of bad weather!). I hope to see you there!
Eingestellt von Michael um 10:25 Keine Kommentare: 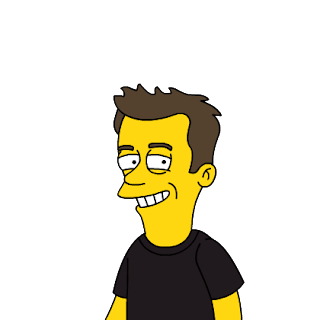 That's me, simpsonized, from this picture. Simpsonize yourself, too!
Eingestellt von Michael um 12:10 Kommentare:

Yes I do. Every day, this picture which I took from a helicopter (sounds good, doesn't it? it was one of these tourist tours... and surprisingly cheap) reminds me of my stay there, these are the "twelve apostles", and it's my desktop background: 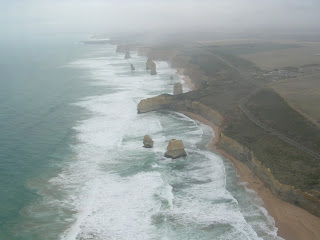 Isn't it strange, how you can wonder how people on the opposite end of the world are doing - how is Rene? How are the other Asoma guys, Turin and Mark? Guys, if you read this, I hope you're all right, and I hope I'll get to meet you again in the not so distant future (which means that Grenville would have to invite me again... well, Mattia keeps reminding him, apparently they even talked about me at the last CAIA party :-) (in addition to watching the great Midwest Teen Sex Show again). Who knows, maybe there's a chance for another visit soon. I sure hope so, I really enjoyed every part of it - the nice work environment on the one hand, places like the Espy on the other... well and surfing of course. 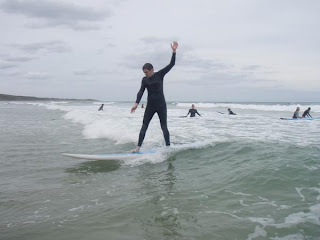 (No, there was no particular reason to hold my hand like that)
Eingestellt von Michael um 12:15 Keine Kommentare:

...ordered a Frankfurter when we went for a game of Billard the other day (I beat him twice, ha!). He put mustard + horseradish + the two sausages on bread 1, added bread 2 on top of that, and tried to eat it like a hamburger - because that's how he thought it's supposed to be eaten! Americans...

Then again, I have to thank him for taking this picture of the mighty Trento goose, "L'occa piu grande del mondo", which was set up for Feste Vigiliane. I told almost everybody about it, but only few have seen it... 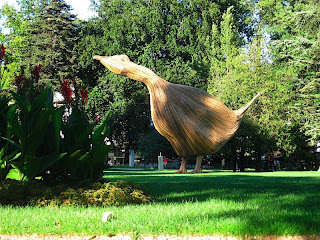 Funny... I knew them for a long time - being a drummer, you can't miss Carter Beauford - but Dave Matthews' singing just wasn't for me. Until, one weekend, I couldn't stop listening to "When the world ends" from the first Central Park concert CD, which Rene gave me a long time ago. I've been a fan ever since; for almost half a year now, I haven't been listening to much else. Sure, the drumming also plays a part in it, but mostly it's just about the songs which are good.

My all-time favorite DMB song is Grey Street, check out the end (from approx 4:35), the drumming at the very end always sends a shiver down my spine.

Speaking of drumming,the groove of Eh Hee is just incredible - so simple, and so powerful... and this is one of the few DMB songs that one can play along to :)

Other great songs: Everyday, Dream Girl, Too Much, Ants Marching, Crash Into Me (if you don't really know DMB, you might still know this one ... the video is terrible though), ... okay, I'll stop there :)
Eingestellt von Michael um 08:38 Keine Kommentare:

I play a lot at home these days because it's just great fun to turn on some music and play along with my e-drumkit... too much fun to get myself to practice, but when I do, I play the transcription of Harry Connick Jr's "How Do Y'all Know" (from his great Star Turtle CD, one of the (sadly only) two funk CD's that he made), from an old Modern Drummer magazine .... it's tricky but I almost got it nailed, I almost sound like Raymond Weber :-)

One thing I'd love to get to work is this rudiment that Carter Beauford from the Dave Matthews Band (of which I'm a big fan btw) always plays - it's just RLRL, but played as two sixteenth notes followed by two eighth notes .. but this only sounds interesting at a speed which isn't human - see around 0:20 in this video for example. Or, maybe even better, 1:00 in this one. Damnit, I'd love to be able to do that. Could someone please tell me how long you have to practice this to get this up to speed? There's even a video of a crazy guy teaching the lick, but he's no help... I guess I can play it at the speed at which he shows it, and, like him, I don't sound like Carter when I do that :-)

Oh, and I'll get myself a second bass drum trigger for my e-drumkit, so I can practice double bass... about time, I really need that for one of my current bands. I occasionally use the double pedal there, but so far I never practiced it before, so it's always a risk ... anyway double bass is fun; I found out that I can actually do this stuff (again a Carter video, but actually an old trick) with double bass, including the cross sticking... sure, as he says in the video, it's only for the sound, not for the show, yeah, yeah...

Tuesday last week we (the Alexander Komlusan Quartet) played as Session Opener in Treibhaus, together with Nina Braithwho arranged this gig. Philipp took a couple of pics and made a video with his cell phone, and Jimmy's girlfriend Toria took some more pictures - thanks!
Eingestellt von Michael um 10:27 Kommentare:

So Tommy and I decided to start a blog today; while it was my idea, he was in fact faster than me. Why a blog? Well - I have an urge to share some of my thoughts with people, so this lets me do that efficiently without getting on everybody's nerves. This will be about private stuff, which means 90% drumming related (yep, boring for non-drummers, that's why this is better than sending emails around :-) ), which is the reason for the name of the blog...

Please leave a comment every now and then so I know that I'm not writing for myself, as a therapy or something - thanks :)